Contents show
1 Yoga is for women
2 You need to be flexible to practice yoga.
3 Yoga is a new religion.
4 “…But think of what other guys will say if they find out I practice yoga!”
5 “I’d look silly in a yoga class.”
6 Where do we go from here?

Nowadays, more and more people are gaining an inkling about yoga and what it can do for your body. Yoga has enjoyed a long tradition of healthy practice in the West. Yoga studios, both virtual and physical, are popping up left and right. Meanwhile, you’ll find online tutorials and virtual classes you can take anytime, anywhere.

However, men still represent but a tiny fraction of yoga practitioners in the West.

Why is that the case? Men are just as concerned about their health, and yoga has a laundry list of health benefits, so why hasn’t it taken off among Western men? Is there still a stigma attached to yoga?

That’s not to mention the mental benefits of yoga—and its proven track record in helping manage stress, which is a silent killer that can have far-ranging, harmful effects on the body and the mind.

Well, you’re in luck—we’re here to clear up some misconceptions you might have had about the highly beneficial practice of yoga caused by misconceptions brought on by stereotypes and assumptions we tend to make about it.

Here are the top 5 misconceptions men have about yoga.

Yoga is for women 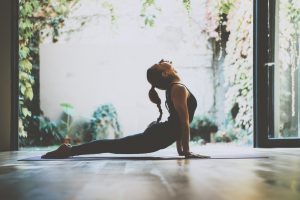 Let’s face it, guys: every time yoga comes up in a discussion, invariably, we think of hot girls in yoga pants, all jockeying for social media clout. The truth is, Western media often paints a picture of yoga to be something mainly women do. But yoga has always been taught and practiced by men since time immemorial.

You need to be flexible to practice yoga. 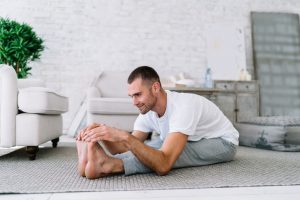 This isn’t even a misconception—it’s a downright excuse to concede that you’re not flexible enough to practice. Well, here’s a thought: yoga actually helps you become more flexible. Flexibility is not a prerequisite to practicing yoga. Staying dedicated and, above all, consistent with yoga practice may help you unlock not just your inherent flexibility but also strength.

Like any practice, you can’t expect to be a master yogi within three weeks. You can’t just jump into advanced postures willy-nilly. Temper your expectations with reality and understand that you need to crawl to be tall. Flexibility and strength can only arise from constant practice.

Yoga is a new religion.

Many individuals have this misconception that practicing yoga is essentially practicing a new religion. It’s an understandably sensitive topic for some, considering the long-standing relationship between yoga and other religions, philosophies, and belief systems.

Yoga is all about achieving an equilibrium between mind, body, and spirit—nowhere does it say that religious belief is needed before you can practice yoga.

By putting you in touch with your inner self, yoga can be a liberating, life-changing practice no matter what creed you associate with.

Even if you aren’t interested in yoga’s philosophical attributes, practicing the poses has nothing at all to do with who you call your god. It’s all a big misunderstanding that needlessly turns off individuals from the benefits of practicing yoga.

“…But think of what other guys will say if they find out I practice yoga!”

You shouldn’t worry about what other guys say, especially when you consider that yoga brings tremendous benefits. Therefore, never, ever let anyone’s opinions dissuade you from enjoying its transformative and beneficial aspects.

Yoga has been around for thousands of years for a good reason: it’s one of the most beneficial practices mankind has engaged in. Much in the same way you or anyone can begin a new workout or diet, you can begin your yoga practice anytime you wish.

Don’t sweat the small stuff. Concentrate on why YOU are practicing it. Don’t let anyone else’s opinions about yoga cloud your own judgment. 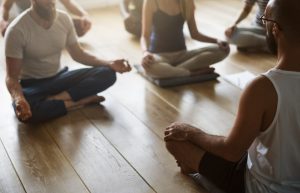 It’s understandable why men would feel awkward around the majority of Western yoga practitioners, which seem to be women. It’s an intimidating prospect for Joe Blow to shy away from a crowd that already did the reps, so to speak, as far as getting comfortable with the practice.

However, it’s really something you should let go of. Yoga was never about competition or comparison on who can do the most poses or who has the best outfits. An experienced yogi will understand that the whole point is to gain a deeper connection to yourself. The only competition you have in the room is with yourself—stop worrying so much about what others think about you.

Where do we go from here?

The goal is to put your preconceived notions about practicing yoga to rest, silencing your ego, and just start practicing. You have the world to gain and nothing more than your ego to lose.

If heading over to your friendly neighborhood yoga studio is still not an option, there is no shortage of online classes that allow you to practice from the comfort of your own home. Moreover, you don’t have to practice yoga with a class—you can hire a personal instructor much as you would hire a trainer.

If you wish to join a live yoga class for the first time, it’s a good idea to bring a friend you can feel comfortable with.

If you’re reading this sentence, it means you’re most likely ready to practice yoga. Don’t let the misconceptions bother you. Even the world’s greatest yogis had to start from square one. No one ever “perfects” their practice—it’s a lifelong, ongoing commitment to ones’ self. Be patient, be resilient, and be compassionate. Yoga may just be the practice your body needs to stay grounded.

6 Basic Emergency Skills You Might Save Someone’s Life With

How Binge Drinking Impacts Weight Loss: Can One...