A Deep Breath: A Look into Lung Cancer

Contents show
1 Small cell vs. non-small cell
1.1 Other types of lung cancer
2 What are the signs?
3 What are the risk factors?
4 How can I prevent lung cancer?
4.1 Remember:

Lung cancer is one of the most common forms of cancer that affects men and women today. For men, it is the second leading form of cancer, just behind prostate cancer. However, it is the leading cause of death, far surpassing other forms of cancer.

Lung cancer is particularly dangerous for men, as it is their leading cause of cancer-related deaths. The risk that a man faces in his lifetime of developing a form of lung cancer is approximately one in thirteen.

While the general outlook for lung cancer patients is relatively poor, if the disease is found early enough in development, it can be survivable.

Lung cancer comes in two main forms: small cell and non-small cell. These are based on how tumor growths look under a microscope, which in turn affects how they grow and develop, making this distinction notable.

Small cell lung cancers happen more commonly in smokers. These make up around 10% of all lung cancer cases, and they are notoriously difficult to spot until they have spread extensively throughout the body.

Other types of lung cancer 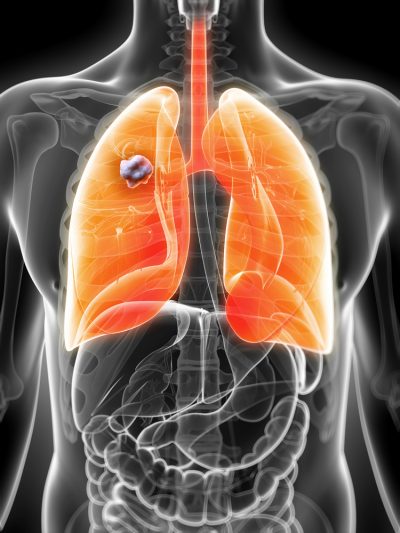 Under the umbrella term of “non-small cell lung cancer,” there are a few different types of cancers. These include:

Large cell carcinoma is typically found in much later stages than the two other types of cancers mentioned. Usually, it is discovered via an X-ray or a CT scan.

Adenocarcinoma is the most common type of lung cancer. It is commonly found through use of a CT scan or an MRI.

Squamous cell carcinoma occurs when tumor growth appears in the lungs, which can often spread to other parts of the body. It is primarily discovered via an X-ray or CT scan.

What are the signs?

There are many symptoms that can be quite common in other facets of life. However, the persistence and combination of these symptoms, paired with risk factors, can help you determine what your lung cancer risk is.

A cough is a universally recognized symptom of lung cancer. Wheezing is also a concern. A persistent cough or one that perpetually worsens is additionally worrying. If you cough up blood, contact a doctor. If you have chest pain that accompanies the cough, contact a doctor.

Weight loss and appetite loss is a common symptom as well. This is especially concerning if weight loss occurred without outside stimulus, like exercise or diet change.

Feelings of weakness and exhaustion are cause for concern as well. These can also lead to a weakened immune system, leading to infections like pneumonia and bronchitis. Another sign of lung cancer can be when infections such as these persist or continually reemerge.

If the cancer has spread to other parts of the body, be on the lookout for:

These can be signs of unrelated problems as well, but coupled with the above symptoms, they are typically indicative of lung cancer.

What are the risk factors?

A great many things can lead to lung cancer. The lungs are a delicate system, and many breathable toxins can affect them. 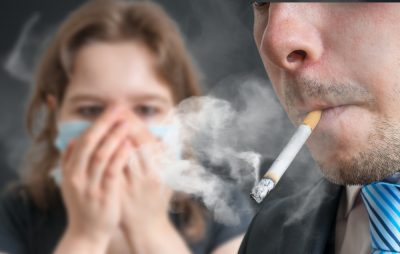 The most common risk factor for lung cancer is tobacco smoke. The highest mortality rates from lung cancer are in habitual smokers, and their risk for developing cancer is also much higher than their non-smoking counterparts. The more and longer you smoke, the greater the risk becomes.

Exposure to radon can also increase your likelihood of developing lung cancer. Radon cannot be easily detected, so it easily escapes under the radar. Just behind smoking, radon is the second most common cause of lung cancer.

Asbestos exposure is another common cause. Asbestos is typically found in mines, mills, plants, shipyards, and in places with specific insulation.

Air pollution can also lead to development of lung cancer. Areas with heavy traffic can raise the risk. Compared to smoking, the risk is much less severe, but there are lung cancer deaths that have been linked to air pollution.

A family history of lung cancer is also an extremely important risk factor to consider. However, it isn’t clear whether this is due to shared common exposures or genetics.

How can I prevent lung cancer?

The best way to stop lung cancer before it starts is not smoking. This is the most important step to good lung health. Don’t begin smoking, or quit smoking if you do already. Steering clear of secondhand smoke also plays an important role.

Getting your home tested for radon is essential for your lung health, but also for the health of those in your home. You may not be able to sense that it is there, but it could be lurking. The best way to know is to be tested.

Avoid asbestos and other chemicals that cause cancer. This means being cautious at work and avoiding carcinogens. Know your risk is higher if you work in mines, mills, plants, and shipyards. If you work in an older building, inquire about the insulation. Knowing your risk is important.

Lung cancer is the most common cause of cancer-related death in men. Their risk of developing a form of lung cancer is statistically higher. However, there are steps to be taken to decrease the risk.

Be aware of the areas you spend time in. Get your home checked for radon, and know the risk for asbestos that you face at your workplace. Don’t start smoking, and quit if you have already begun. Try to avoid heavily trafficked areas with more air pollution. Know your risk factors and see your doctor for regular checkups.

Men Can Perform Better with These Foods

What You Need to Know About Nutrition in Your 30’s