How Binge Drinking Impacts Weight Loss: Can One Night Ruin Your Diet?

Contents show
1 1. Always Hungry
2 2. Alcohol is Rich in Calories
3 3. Alcohol Inhibits Fat Oxidation
4 How Can I Limit My Alcohol Consumption?
5 1. Eat While You Drink
6 2. Limit Fancy Drinks
7 3. Limit Yourself

It’s becoming more and more common for the weekend to not only be considered a time off from work, but also a time off from other responsibilities as well such as our diets. While occasional cheating isn’t going to do you much harm and may even keep you on track to your goal, doing it too often can cause more harm than good.

While many of us are extremely dedicated to our workout routine, our diet, and are generally on the ball in other aspects of our life, we tend to fall off on the weekends. Most of us are fully aware that we are slacking in this regard, however the impact of doing so is much greater than most of us anticipate.

Believe it or not some of us who indulge in drinking a little bit more than we should have can literally put on pounds of weight just in a week and alone. In many parts of the world it isn’t uncommon for people to be drinking over 10,000 calories in just alcohol alone over the weekend. This type of binge drinking along with all the other calories are consuming from bar food adds up really fast.

Here are the major reasons why you should ease up on the alcohol this week in, and why exactly excessive alcohol consumption has such a tremendous impact on our ability to lose weight. 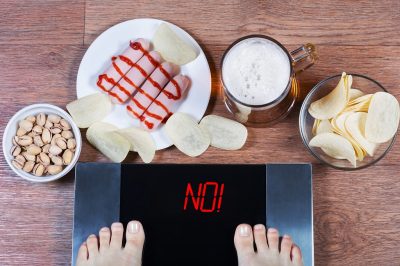 There’s a reason why so many bars and restaurants love customers who like to drink along with their meals – drinking makes them eat even food. This has to do with the attrition of alcohol itself, which spread a nutritionally deficient outside of the sugars you find in the alcohol.

When you consume alcohol, your body has to produce insulin to counteract the access amount of sugar that’s entering the bloodstream. Once you stop drinking though, your body’s sugar levels begin to dip in to the low range. This problem can be solved with more sugar in the form of calories, and an increase in hunger. This is a major reason why so many people crave unhealthy greasy foods after having a nice pint.

2. Alcohol is Rich in Calories

Your average alcoholic drink is going to cost 150 calories on the low end, and those are nude drinks without any fancy additives. When you start to add sodas, syrups, sugar and other additives to your drink, the calorie count can go through the roof.

It may not seem like you’re drinking that many calories, but you can easily be putting on a pound or two each sitting if not more. Another thing to worry about here is you’re a guy is that most of this weight is going to accumulate right around the midsection, which is some of the most difficult fat to get rid of. Accumulation of this fat also encourages an increase secretion of the hormone cortisol, which increases stress and makes the weight loss problem that much more difficult to solve.

Another way which alcohol can impact our ability to lose weight is an indirect one, as it has to do with the bodies preference over fuel sources. One of the sources the body likes to use for energy is fat, which is converted by the liver into various compounds for the body to use as fuel. 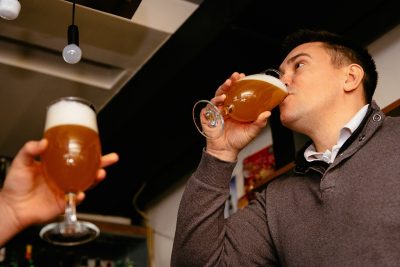 Alcohol and other compounds which are viewed as toxins are also processed by the liver, and are usually stored there as well. The case is different for alcohol however as this compound is eventually converted into acetate, which is a preferred source of fuel by the body.

So in essence when we drink we are providing the body with another preferred source of fuel, which it will use in place of various fats. This in turn means that instead of the body using these fats to carry out whenever processes it needs to do so, it is in turn using the acetate it’s getting from alcohol to do so. This is how binge drinking alcohol can indirectly cause an individual to gain more weight.

How Can I Limit My Alcohol Consumption?

We all have good intentions going into a fun night of drinking are partying, however our they don’t always hold up and we end up overindulging. Here are some simple things we can do the next time we’re out drinking to make things easier on ourselves.

1. Eat While You Drink

Eating while you drink is going to help reduce your alcohol consumption and will minimally impact your weight. Many people think that the best way to go is to just state alcoholic drinks, as they’ll end up consuming more calories in the process. The problem with this idea is that as we mentioned earlier, alcohol consumption leads to hunger, so by not eating a meal with your drink you may end up consuming more calories than you would have.

The rule of thumb states that the fancier the drink is, the more calories is going to contain. If you’re trying to watch your weight, the best thing to do here is to keep your drinks as simple as possible. This is because fancier drinks tend to contain more ingredients, and more often than not these ingredients consist of some type of sugar which increases the overall calories of the drink itself.

Sometimes the peer pressure is too much to handle, however you should do your best to limit your alcohol consumption as much as possible. Just because you don’t ring during the week doesn’t mean you have to make up for on the weekend, so try not to consume 6-7 drinks in a sitting. Moderation will go a long way towards keeping those pounds off.

Sex Coffee, Your Lady, and You