Vaping e-cigarettes is a dangerous yet trendy alternative to smoking cigarettes that teens and young adults are trying out at present, yet it’s also not good for anyone’s health.

The cigarette companies that made this trend (through the invention of the e-cigarette) knows how dangerous this is for people’s health because they hide how dangerous e-cigarettes are through shady tactics. For example, an e-cigarette comes in different flavors, like creme brulee, cucumber, or strawberry; this makes the e-cigarette an attractive commodity towards the young people, so they won’t question their product too much. Also, e-cigarettes also come in the guises of USB pods (called “Juul pods”), pens, and other items that we use in our everyday lives in order to hide them from parents, school officials, and older people who would be wise enough to see that e-cigarettes are nothing but dangerous.

And finally, cigarette companies love to market vaping as a safer alternative to cigarettes; That’s pretty much untrue since vaping has the same disadvantages that you can get from smoking cigarettes. The cigarette companies will stoop to any level to make a quick buck, and they will deceive and exploit the young and vulnerable to do it. And it’s easy for them to do so since there is no health campaign to counteract the vaping trend, especially when vaping is something new.

These are the disadvantages to vaping e-cigarettes:

One Juul pod can contain a cigarette pack worth of nicotine. In that case, one Juul pod is more addictive than a single cigarette alone, which says something about the deplorable depths that these companies are willing to go in order to lure these young people in and it also shows how easily it is to lure these young people in through such addictive stimulants. And if you think you have the willpower to resist the powerful stimulant called nicotine, you will find yourself in for a tough battle since nicotine is a very powerful stimulant that many people find trouble giving up for a reason. 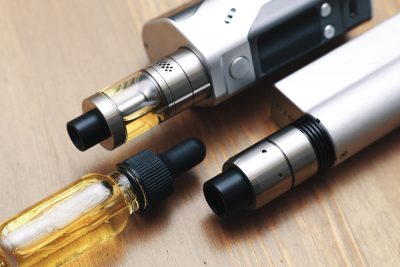 You will still get high heart rate, blood pressure, lung disease, chronic bronchitis, with the added bonus of type 2 diabetes (thanks to the flavoring within the e-cigarettes). With this in mind, your lifespan will be cut short, your quality of life will suck, and most if not all of your money and health insurance will go to surgeries in order to either treat the disease you have and/or keep you alive during your final years of life.

These two chemicals are very poisonous to the human body and these two chemicals have been known to kill people when swallowed, so the possibility of death still exists when taking either formaldehyde or antifreeze or both. This is very deplorable that these two poisons are in these e-cigarettes, to begin with, especially since there is the possibility of death when you swallow these substances. They don’t belong in the human body, not even for a smoke because all of those toxins can and will accumulate in your body gradually over time. It’s not just something that will go away once you puff the smoke out.

Just because it smells fruity doesn’t mean it’s not a risk to non-users or to yourself. Second-hand smoking is still a thing to be cautious of and just because you smoke through a new invention doesn’t give you the right to smoke in front of other people and think that it’s okay and safe to do it. Teenagers and young adults don’t realize that e-cigarettes still contain carcinogens that are still a risk to non-users that are around them. Also, it doesn’t help that teens and young adults may sneak a smoke with their disguised e-cigarette on hand when they think no authority figure is looking. 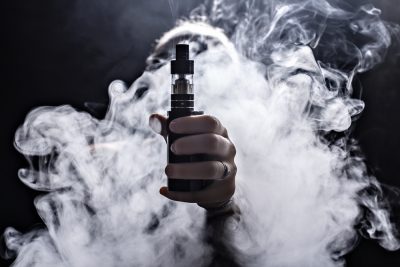 We all know and are aware that smoking cigarettes are dangerous and that nicotine in cigarettes can damage teenage development in the brain. We have the unavoidable health campaign to serve as a reminder of the dangers of smoking, especially during public school. Companies like Juul (who make Juul pods for e-cigarettes) and Cigarette companies take advantage of the fact that e-cigarettes have no health campaign to combat against it by turning e-cigarettes into a seemingly, “consequence-free” trend. The nicotine in e-cigarettes can mess with teens, and young adults’ development (the human brain stops developing by age 25) and this trend can interfere with memory and attention processing when you add nicotine to a young, developing brain.

Granted, regular cigarettes have everything else that’s poisonous for you, like rat poison or arsenic, but an e-cigarette has an extra poison, and that makes it extra dangerous. And what’s worse is that e-cigarettes are not cautioned by health campaigns like cigarettes are, making the trend easier to lure teenagers and young adults in while they oblivious as to what trend they are following until it is too late.

Exercising on a Budget

Impotence is a Side Effect of Radical Prostatectomy