Many people believe that once you hit your senior years, sex is no longer important in your life. Well, it’s true that sexual desire and sexual function tend to decline as you age. But it doesn’t necessarily mean that you won’t be having sex anymore when you’re already a senior citizen.

Truth be told, even senior citizens engage in sex and intimacy, too. Nowadays, many men who are already in their 70s are still able to maintain their sexual virility. Here are five myths related to sex among the elderly that have long been debunked.

It’s not true that sex is no longer necessary among the elderly. In fact, according to the National Poll on Healthy Aging, 75% of people aged 65-80 years old believe that sex plays an important role in romantic relationships, whatever the age of the couple may be.

In addition, among those who indicated that they were currently in a romantic relationship, more than half reported that they were still sexually active. Even among the elderly, sex continues to play an important role in their overall quality of life.

Another myth related to elderly sexuality is that if your penis doesn’t get hard right away, then you’re not aroused. This is also untrue. Sexual arousal is perceived and felt in varying degrees, and an erection doesn’t always happen right away even when you’re being sexually stimulated.

When your penis isn’t erect, it doesn’t mean that you’re not feeling any sexual satisfaction at all. Even in young people, arousal does not always result in an erection. Admittedly, many young men automatically get an erection whenever they see or hear something sexy.

For elderly people, they may require more sexual stimulation before they achieve an erection. If you used to get hard the moment you saw your partner undressing, visual sexual stimuli may no longer be sufficient to make you hard when you’re in your 60s or 70s already. Hence, erection may not automatically happen unless you’re physically sexually stimulated.

Although it’s undeniable that an orgasm can bring you so much pleasure, for elderly couples, sex doesn’t always have to end with an orgasm. The act of making love itself is already a great source of pleasure.

In addition, many elderly couples value the intimacy associated with making love more than they value achieving orgasms. This is not to say that when elderly people have sex, they don’t orgasm anymore. Rather, the focus is now more on the sexual intimacy shared instead of on orgasmic pleasure.

Many people think that when you’re old and suffer from a heart disease, you shouldn’t engage in sexual activities anymore. The truth is that with regard to the physical effort you need to exert to have sex, it’s just like engaging in a mild physical activity.

It’s just like doing housework, or gardening, or climbing three flights of stairs. If you’re up for that, you can definitely engage in sex. However, you do need to make sure that your condition is stable already before you engage in sex. If you’re still experiencing chest pains, you should be consulting your doctor instead of playing in the bedroom.

This is another myth about elderly sexuality. Nobody really sets an age limit for giving or receiving oral sex. You don’t really tell yourself that since you’ve already celebrated your 70th birthday, you won’t be asking your partner for oral sex anymore.

In fact, for elderly couples, oral sex may even be better than penetrative vaginal sex. Oral sex promotes increased intimacy, and it’s a good way to maintain a strong bond between partners. Practically speaking, oral sex may be easier and more convenient, especially for elderly couples who are no longer as physically strong or flexible as they once were.

The belief that impotence is inevitable and that it cannot be cured may have been appropriate centuries ago, but it’s simply no longer the case. There are so many medications and surgical solutions for treating erectile problems available now. 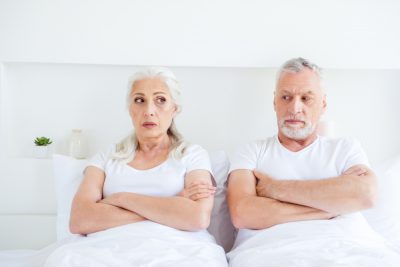 Even men who have severe erectile dysfunction have several options for restoring their ability to achieve an erection that’s sufficiently hard for engaging in sexual intercourse. If oral medications are not enough, you can always talk to your urologist about getting a penile prosthesis implanted.

True, erectile dysfunction is more likely to happen as you grow older. But not everyone becomes impotent when they reach their 70s or even their 80s. There are even men who are simply blessed with overflowing sexual virility that they’re still able to father children in their 90s.

If you take really good care of your body, erectile dysfunction doesn’t have to be inevitable for you. And it’s not totally incurable either.

Dealing With Erectile Problems As You Age

If you’re already starting to show signs of erectile dysfunction, one way that you can fight it is by taking an all-natural male enhancement supplement.

You’ll find aphrodisiacs and libido enhancers in it. This safe supplement also contains natural testosterone and stamina boosters. And, of course, it contains herbs that are proven effective in improving erectile function.

Natural male enhancement supplement also contains Tongkat Ali, which is popular for its ergogenic and pro-sexual properties. If you feel like you need a stamina boost, both Tongkat Ali and maca can give you the energy you need for sex. Tongkat Ali is also recognized as a natural remedy for male sexual problems like impotence, low libido, and infertility.

Tips to Prevent Being Diagnosed with Prostate Cancer