Have you been struggling to use the resistance band during workout sessions but don’t seem to be making headway? What if I put it to you that it’s easy to engage these pieces of amazing creation and craftsmanship? Yes, you heard me right. It’s only a matter of learning to use them and in no time, you’d be a professional fitness trainer with the resistance band.

Of a truth, unlike the treadmill, the barbell, and the dumbbell whose usage is somewhat easy to relate with, the resistance band is quite a challenge. It takes some bit of mastery to be able to use it towards whatever exercise ends. However, its ability to spice up different aspects of the workout be it cardio, strength training, upper body training, lower body training, and resistance, makes it unique.

Come with me as I intimate you on how to not only use one resistance band but how you can alternate between four of them, even more, depending on how savvy you are.

However, let us take quickly take a delve into what resistance band exercise entails and the benefits it posses. 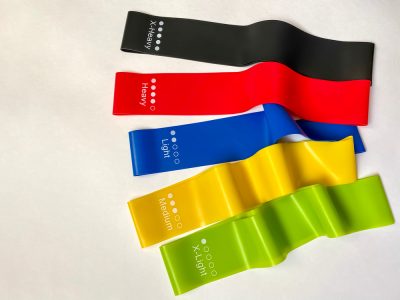 Resistance bands are elastic bands use to build muscles. They come in a variety of colours, thickness, shapes, and sizes. They are called resistance bands because when pulled apart, they can contract back to their original shape. Each resistance has its own elastic power and it varies from one band to another – the thicker, the harder the resistance. Initially, resistance bands were used by rehabilitation patients who are just recovering from an injury.   Subsequently, it was adopted by other trainers who then used it for rigorous muscle training.

Benefits of using a resistance band

There are a lot of benefits attached to training with a resistance band. Some of these benefits include:

It primarily fires up your muscles: when you pull it apart, it pulls itself back, hence dragging your muscle along with it. In the process, it works your muscles as they compel the muscle fibres to contract. In the short run, it increases your muscles and the strength of your bones.

It opens up a variety of options to exercise in different possible ways: with the bands, exercising can be tilted in whatever direction as it pleases you.

They simultaneously train your strength and endurance level; for instance, by pulling the bands apart, you use strength. Almost immediately, you pull it apart, the band itself wants to come back to its initial position, so naturally, it pulls your muscles to contract. However, your ability to keep it pulled apart tests your level of strength and endurance. 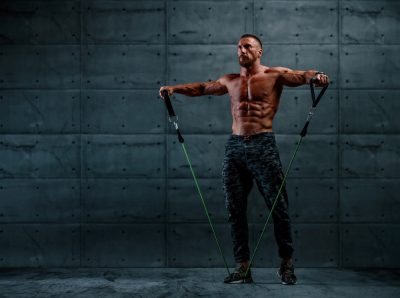 There are different types of resistance bands and each has specific uses. For instance, there are the tube bands with handles which physically share a resemblance with jump robes but are made of elastic rubber. On either end of the band, there are pulley handles made of plastic or nylon just to ensure a safe grip. This band is commonly used for bicep curls exercises and the shoulder press. You can use them for the full-body, upper body, or lower body workout; there’s also the large loop bands, which are larger but flat and thinner. They are used during pull-ups to assists the body trainer. You can use them for a variety of workout moves; there are also mini bands which are smaller bands. They are thicker and used for insane glute workouts. You can also use them to build hip strength; there’s also the figure-eight bands, these bands are made in cylindrical shape but styled like figure 8. They also have a handle which makes it easy to use them for upper body strength exercise; there are also the therapy bands designed like the large loop bands but are thinner in width. They are used for physical therapy aimed at rehabilitation.

You can alternate between any of these resistance bands to have build muscles quickly instead of sticking to just one. For instance, you can use the tube bands with handles for a four-way exercise where you wear the resistance band on your two widespread hands and your two widespread legs, after which you can pull towards the four different positions. This is intended for a full-body workout. After this, you can alternate with the large loop bands which you’d use to train your glute. Use the band to create tension between your hips and your glute for a massive butt workout.

How Can I Get More Energy After 60?