Ready to hit the gym? Not so fast.

Gym accidents happen every now and then, and things could go wrong very quickly. According to statistics, more than 400,000 people were injured while exercising or using gym equipment in 2012. Not knowing what you’re doing could land you in the emergency room very quickly.

Gyms aren’t known for being the haven for safety, but certain safeguards are put in place to minimize the accidents in the gym. The courts are also awarding hefty damages to plaintiffs who had been injured due to accidents that happen inside the gym. Even so, it’s a lot better to be safe than be rich and paralyzed.

Gym safety is one of the first things your instructor would teach you when you first step foot in a gym. Without knowing the fundamentals and how gym machines are operated, you could be putting yourself and others at risk for injuries. Here are some examples of accidents that happened in the gym:

In 2017, a 20-year-old man from Malaysia died after a 238 lb. barbell fell on his neck while attempting a bench press. According to the witnesses, the man was trying to push himself to the limit when his arms buckled and the barbell fell on his neck, killing him almost instantly. The paramedics who arrived at the scene were not able to revive the man, and he was pronounced dead on the spot.

The victim’s friend, who was with him at the gym said that he worked out 5 days a week, with every session lasting 2 hours. Sources say that he had several years of experience, and it’s unlikely if the accident was caused by the misuse of the equipment.

How to prevent weightlifting accidents

In 2018, a Brazilian woman was left paralyzed in her arms and legs after a freak accident caused her to slip and break her neck. The sources say that the woman was doing inverted sit-ups, which is a variation of the traditional sit-ups anchored on an inclined slope. The exercise puts your head on a downward angle, with your legs firmly hooked on the footpegs. It’s possible that she was attempting to dismount when she let go of her legs sooner, which caused her to slip and fall on her neck. She had a broken fifth vertebra, with other sections of her spine dislocated or crushed. The accident compressed her spinal cord, leading to paralysis. She eventually recovered after six months, with consistent therapy.

Filipino actor gets his face crushed by a loose weight plate

In 2014, a Filipino actor had his face crushed after his spotter accidentally dislodged the plates as he was getting up from the bench. The plate fell in the center of his face, causing multiple bone fractures and breaking his nose.

Fortunately, his skull and neck were intact and were not damaged due to the accident. It took several years for the actor to recover from the accident, which changed the way he looked. He had to undergo several facial reconstruction surgeries to restore his face. It was unclear whether they pressed charges against the spotter or the facility for negligence. 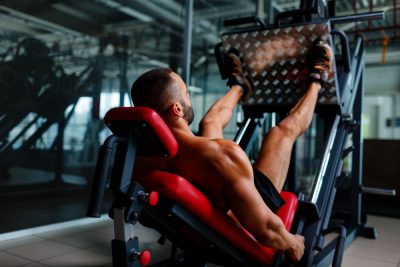 In a video posted online in 2016, a man was seen doing a seated leg press when his legs buckled and appeared to have been broken around the kneecap. His entire leg went sideways and from the audio, it was clear that he was wincing in pain because of the accident. The video does not show what happened afterward, but it was clear that there was a serious injury to the man’s legs and knees.

How to avoid leg press injuries:

Never take the fundamentals for granted. It’s better to learn from people who really know what they are doing instead of trying to figure it out yourself. Your safety is on the line whenever you use gym equipment without training or supervision. It’s nice to test your limits but does so with the help of people who can ensure your safety while you attempt to break your own records.

How to Avoid Being a New Dad with a Dad Bod

How Can I Get More Energy After 60?