Though many health conscious and environmentally conscious individuals want to try vegetarianism, many of them don’t know where to start, or worse, how to sustain their new lifestyle choice. Often this is a question of proper nutritional intake or a perceived lack of options. If this sounds like your situation, continue reading for advice on surmounting those obstacles. And remember—Healthy vegetarianism doesn’t have to be difficult.

The question most people have about vegetarianism is how it’s possible to get enough protein. Here is the answer to that question: 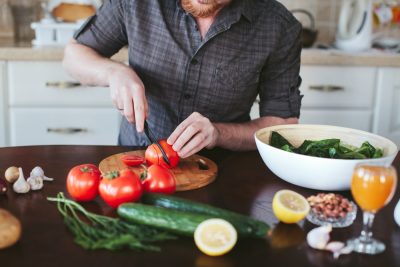 Happy, healthy, and successful long-term vegetarians need to be good cooks. And if they aren’t already good cooks, it would benefit them to start. If this sounds intimidating, rest assured that all you really need to know is how to cut up and fry an onion and some garlic, and you’ll already be on your way.

You might have read the above cooking instructions and thought, “Who has time to cook from scratch?” In truth, virtually everyone has the time. The secret is cooking in bulk.

Willpower is its most elusive when needs haven’t been recently met. If you eat before you go grocery shopping, you will be much more likely to eat according to your goals. Oftentimes, the most influential battleground in determining whether a diet or lifestyle will be successful is the grocery store.

Be aware of alternative vegetarian supplements. Reluctance to consume fish oils or fear of heavy metals doesn’t necessarily mean nutritional deficiency, for example, as the market has become aware that there is demand for vegan alternatives to fish oils.

Unlike twenty years ago, it is possible to go vegan or even vegetarian without missing out on many of life’s joys.

Tricks to Strengthen the Immune System